So I got home late from work, and I'm very tired. The goal: A romantic Valentine's dinner for two made from whatever I can find in the refrigerator - in about an hour. 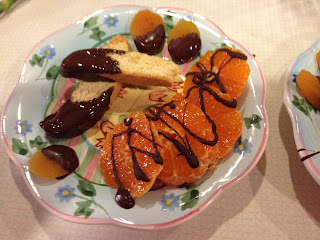 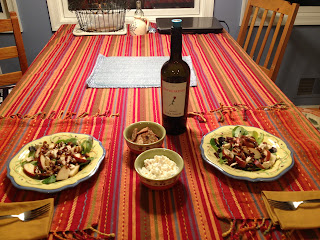 Then, the last bit of spring mix goes under 2 ripe pears, some chopped dates, chopped roasted pecans left from the other night, and the last of the goat cheese with fig, topped with vanilla fig balsamic vinegar, olive oil, salt & pepper. 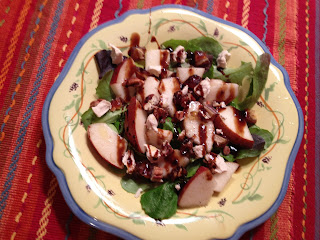 Now for the main course. In the vegetable bin are leeks, red bell peppers, and yellow grape tomatoes, I have some vegetable stock that I made last weekend, and there is that little bit of white wine...
So I take out the arborito rice, put the stock in a pot and set it on the stove to heat up, chop the leeks and saute them in a tiny bit of butter with a little olive oil, then add chopped red peppers, saute a bit more, then add the rice (1c) and saute that mix for a few minutes, then add the wine - about 1/2 cup I'd guess, and cook till it's absorbed. From there, I add 1 cup of warm stock at a time, cooking and stirring until it is absorbed. Near the end of the cooking I add about a cup and a half of halved yellow grape tomatoes, salt & pepper and cook until the tomatoes start to soften. 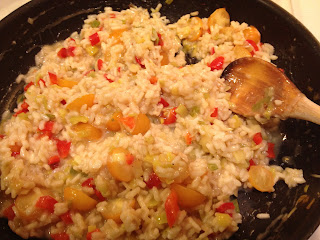 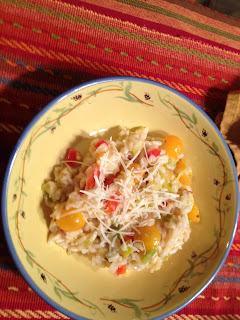 I mixed in about 1/4 cup freshly grated Parmesean, then topped with a little more.

Valentine dessert - must contain chocolate I think - and I need something quick - so - while the risotto is cooking, I pull some biscotti out of the freezer (brought to a party by a friend - I threw them in there so I wouldn't eat them all in one sitting), slice up 2 clementines, and melt some 60% bittersweet chocolate. Then I dip and drizzle. 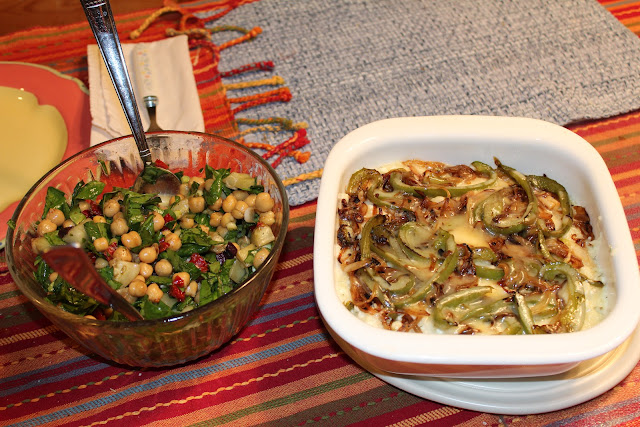 I usually re-bake potatoes in their shells, but what I had was a bunch of little potatoes with thin skins, so I made a casserole instead.

Combine all ingredients in a bowl. You can add additional olive oil, balsamic vinegar, salt & pepper, to taste. 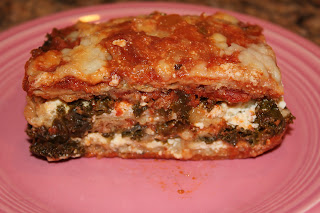 This dish was born in the aftermath of Superstorm Sandy. The power was out for 12 days. Luckily, I packed every empty space in the freezer with containers of water days before the storm hit - and those big blocks of ice kept my stash of frozen summer veggies frozen for a few days.
I cooked up everything that was starting to defrost - check out the blog entries for Storm Soup and Veggie Chili. Then my friend and co-worker, Mary, let me put the still frozen items in her freezer, where they stayed until the power came back on - and we are still enjoying them (check out the soon to be posted recipe for Roasted Ratatoille and polenta lasana with fresh mozarella cheese).
When our CSA share was full of eggplant, two and three and four eggplants every week, I prepped one of them for rollatini by slicing it lengthwise, dredging in flour, then dipping in milk, coating with breadcrumbs, placing the slices on a foil lined baking sheet coated with olive oil, spraying the tops with olive oil cooking spray and baking at 400 F for 30 minutes until they were crispy on the outside and soft on the inside. Then I froze the slices, separated by waxed paper.
Later in the season, I sauteed a bunch of kale with some onions and froze that.
After the storm, both of those frozen packages were among the first to defrost, and there was some leftover ricotta and mozerella cheese that had been in the refrigeratorand was now residing in a cooler filled with ice, so, I invented eggplant and kale lasagna.
I used the eggplant slices like lasagna noodles in a casserole dish and layered:
pasta sauce
eggplant
ricotta
sauteed kale
shredded mozarella
then repeated the layers until I got to the top of the dish, finishing with sauce and mozarella.
I baked it at 350 F for an hour.
Fabulous.
Posted by Karen at 8:43 PM No comments: 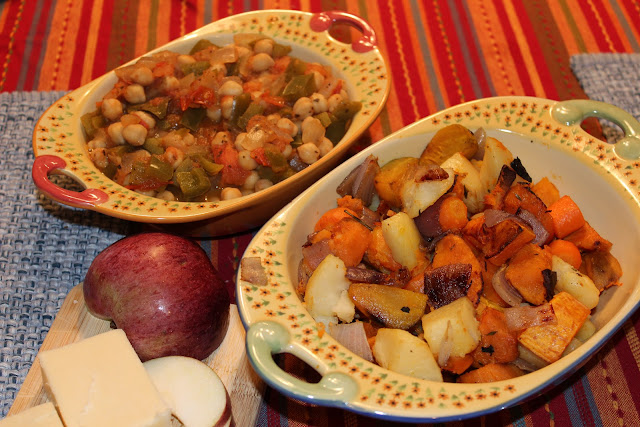 One of the last CSA shares of the summer had a green bell pepper and some green slightly unripe tomatoes. I let the tomatoes ripen on a cookie cooling rack. I can't eat a tomato raw if it isn't at its peak - and these did not look peak, so I decided to stew them.
I put some root vegetables in the oven first, so they could roast while I made the stew.

Roasted Root Vegetables
Any mixture of fall vegetables will do. I had a red onion, part of a butternut squash, a Yukon Gold potato and. a sweet potato.
Pre-heat the oven to 400 F.
Peel and cut the veggies into chunks. Smaller pieces will cook faster - but you have to check them often so they don't burn.
Toss the veggies with 1 tbls olive oil. I like to add some snipped rosmary leaves.
Line a rimmed baking sheet with parchment paper (or foil), spray lightly with olive oil cooking spray, then spread the veggies in one layer with the bigger pieces towards the edges of the pan.
Roast at 400 F for 30-60- minutes, depending on quantity and size of veggie chunks. Check them every 30 minutes or so, stir and push very cooked chunks to the center.
While they are cooking, make the stew.

I served this combo with a fresh fall apple and really good cheddar cheese.
Posted by Karen at 7:31 PM No comments: 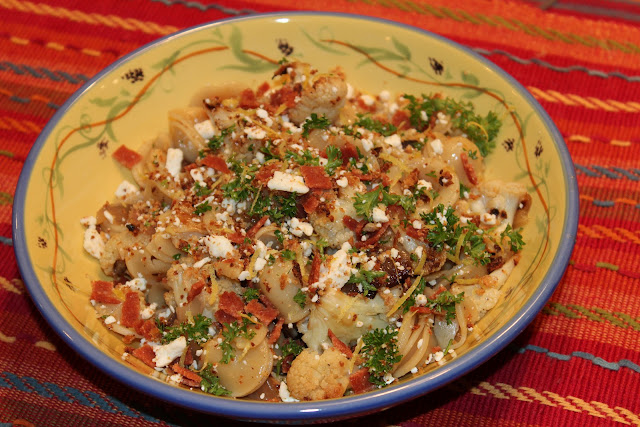 I started with this recipe:
http://www.healthygreenkitchen.com/pasta-with-roasted-cauliflower-and-lemon-parmesan-breadcrumbs.html
With the following changes:
I used whole wheat orrichette pasta.
I cut the olive oil to 2 TBS.
I used LightLife Smart Bacon (vegan)
Always use the best parmesean you can get, and grate it fresh.
I was out of Parmesean, so I used Feta.
Posted by Karen at 7:11 PM No comments: 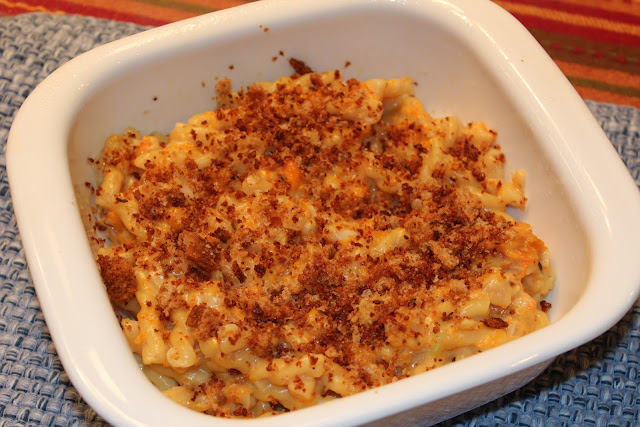 Ingredients
olive oil cooking spray
1 TBS + 1 TSP butter
2 TBS flour
1 cup milk (I used almond)
1 cup cheddar
1 cup chopped onions
1 cup roasted and mashed butternut squash
8 oz cooked gemelli pasta
1/4 cup savory bread crumbs
***********
Milk: your preference - cows milk, soy, almond
Butter - can be replaced with olive oil or vegan margarine.
Cheddar - you can use low fat or no-fat
I made the bread crumbs from herbed wheat bread
*************
Pre-heat the oven to 350 F. Spray an 8 x 8 casserole pan with cooking spray. Saute the onions in the butter for several minutes until softened and beginning to brown, then add flour and cook, stirring, for 2-3 minutes more. Add the milk, slowly, with whisking. Cook & stir for 5 minutes, then add cheese. Stir to melt. Add squash and stir, then mix in the pasta and transfer to the prepared pan. Melt 1 tsp butter into the breadcrumbs. Sprinkle over top.
Bake 30 minutes or so, until top is browning and cheese is bubbly.
Serve with Kale & Red Onions 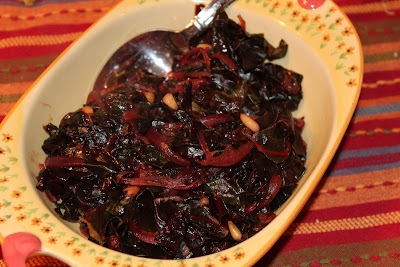 1 bunch kale
1 small red onion
1 TBS olive oil
2 TBS pine nuts
1-2 TBS balsamic vinegar
Cut the ribs out of the kale and slice into ribbons. Cut the onion in half and slice. Saute the onion in the olive oil for 5 minutes, then add kale and saute 10 to 20 minutes or until tender. Stir in balsamic vinegar, sprinkle with pine nuts.
Posted by Karen at 6:55 PM No comments:


It is tasty, and fun, and made with tortilla chips. A great way to use them up when they start to get a little stale. 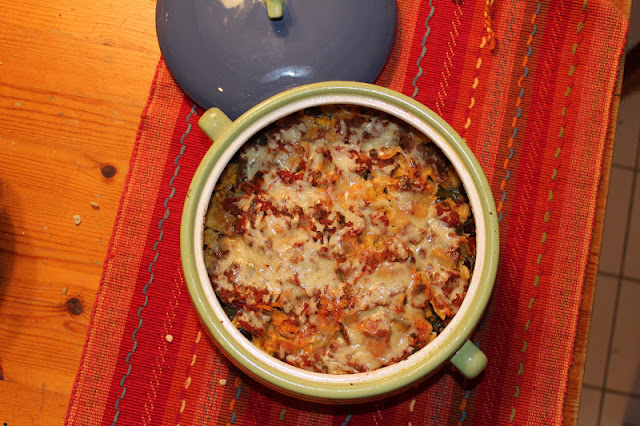