This is a Semi-home-made meal. We love falafel - and lately - as I have not been feeling well  - we need easy. So, we decided to try Trader Joe's frozen version. We, unfortunately, have a collective memory that contains some pretty spectacular falafel sandwiches. S., after all , spent five months in Jerusalem, and we all had some pretty fabulous falafel at L'As du Falafel in Paris last March (perfect falafel, topped with french fries, and pickles, and tahini and - aaaaah...). So. we tried to approach this taste test with an open mind - hoping to find at least an acceptable stand in until the next home-made version trial  - or the next trip to Paris or Jerusalem.

TJ's falafel was very good. Nice crisp outside, nice texture, and good flavor - cilantro is a part of the spice mix - which works for me. We had some very good, fresh pita bread, some Sabra Tahini Hummus and some Israeli olives. I made a salad of cucumbers, peppers, red onion, olive oil and red wine vinegar. I like a little sour cream as well. The result was very tasty, very filling - next year in...well - either Paris or Jerusalem would work for me! 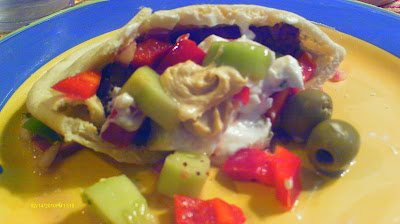 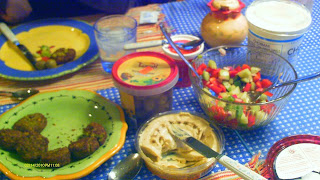 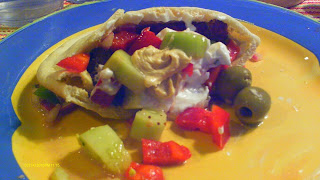