I got home from work at 5:30 and was due to meet with R. & C. at 7:00. On my drive home I ran through the fridge & pantry in my mind thinking,  - what can I do that is fast and easy? I walked in the door, took off my coat, and began chopping an onion (large pieces) which I threw into the stew pot with some olive oil and started it cooking. Then I chopped a couple of carrots (on the diagonal - because they look nicer in the stew that way) and 3 stalks of celery (same way) and threw them into the pot as well. I let those cook while I peeled 2 sweet potatoes that have been sitting around for a while and cut them into 1/2 inch or so pieces, then added them to the pot. Next drained and rinsed a can of chick peas and added them. I added about a cup and a half of home-made vegetable stock and let everything stew. I put 2 Morningstar Farms Veggie Italian Sausages on top of the vegetables and let them heat up. when the sweet potatoes were fork tender, I broke up the sausages and mixed them in and added about 2 cups of baby spinach leaves, stirred them in and stewed some more until they were wilted and still bright green. A little salt & pepper. Meanwhile, cooked a box of Nile Spice Cous Cous with garlic and olive oil. Served the stew over the cous cous, and ran out the door. 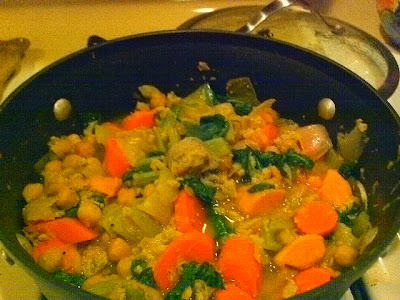 What I would have done differently if I wan't in such a rush: Browned the "sausage" instead of steaming it, cut it into pieces, and put them on top of each bowl instead of stirring them in - because the way I did it, they broke up into a kind of mush - tasted fine but not so pretty to look at. You could leave out the fake veggie meat and add spices - cumin & corriander, or dill, or caraway seeds, maybe.
Posted by Karen at 10:43 PM